Yesterday we went to see the Builders Merchant at the bottom of the hill to see if our little road was too narrow for delivery of the vast amounts of sand and cement that will be needed to make the concrete floor for the cellar. After a bit of debate about whether their big lorry could get up the hill and whether there was room to dump stuff, Super Mario was sent to look.

He jumped in Madame's car and followed us up the hill and between us he decided that he could get the big dumpy bags of sand into the front garden from the big lorry, if we removed the flower bed and some of the overhead pergola. So I have spent the time since then emptying the flower bed of plants and soil. (It has real soil!!! not just chalk lumps). Having done that (and saved it carefully in a heap that will undoubtedly be in the wong place) I couldn't resist hitting a few walls with a hammer. So the end concrete wall is lovely stone and the house wall plaster only falls off in the places that had been repaired. And the concrete flowerbed edges are removable in spite of being set in masses of concrete and having reinforcing bars in them.

I wonder which relation appeared at the house with a cement mixer at some time in the past. 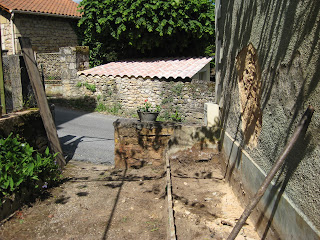 We also met the neighbours next but one up the hill who had other local gossip including the fact that the old lady owner had chickens in here.................. 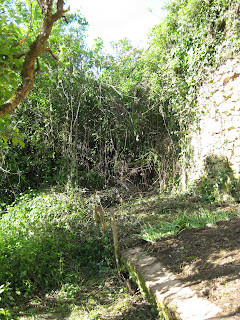