Blimey they all came!

Today is Dear Daughter's birthday and has proved to be an excellent day. 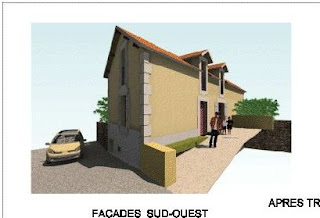 These dormers are proving a problem. Called lucernes (loo cairns) in french there is a lot of sucking of teeth with them because the new windows will be very close to the A frames in the roof.

Second guys were franchised local firm. 'Can but only in timber'.

Today's guys were the retired local roofer and his son in law. 'Bien sur'.

English guys come back with a very reasonable quote having changed their minds about how they would do the dormers.(Mmm not sure I'm confident with that.)

Loved the local guys who also arrived on time but only after 3 phone calls. Father had done some repairs to the house 20 years ago, of course he knew the previous owners, was twinkly and jokey but must drive his son in law mad. He obviously only does quotes and goes to houses he wants to see, now the s-i-l does all the work but dad had a lovely time and was full of hints and suggestions. No you don't want the same machined tiles you need these more local, same price, ones. No you don't need the special caste iron windows approved by Batiments de France, we will put in much better and cheaper Velux. Meanwhile s-i-l measuring, asking the right questions, taking in what we wanted. Then crunch time. When can you do it. S-i-l says not til end of the year, maybe next year. Me 'oh but we want it before the winter if possible'. Dad jumps in with 'of course they need it sooner than that, they want to get on, you need to start a renovation at the hat'. So we will wait and see.

I love that the English guys quote for caste roof lights, the franchised firm know that there is a new Velux window that is much better and cheaper and approved by Batiments. And the local guys just ignore it all and put in what they want with a gallic shrug.

Next guy to arrive was the mason. I'm glad I have seen him doing this to a house as he started talking about the size of hole he will have to make. 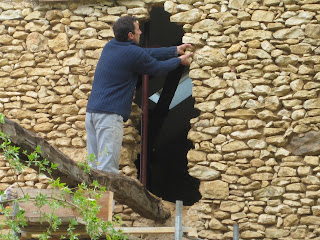 Practically the whole of the end wall of the house will have to come out.  He wants to do it in August!! Yes, a frenchman working in August. He would have to have a little holiday of course but even so.

After he had finished talking he was exploring the site like a sniffer dog. Almost yelping with excitement when he finds another of the sort of stone that he will need that must be kept. Him Outdoors had uncovered several bricks in his explorations of the cellar which were an excitement and there are so many suitable 'pierre d'ongles' (the cut corner stones) in the ruin that he probably wouldn't need to buy any more. Just have to get them out of the roots of the walnut tree :-(

And he brought the concrete guy back and they were happy about the excavations in the cellar.

And then the stairman came and he has created a beautiful stair that fits perfectly in the space and will look brilliant.

Huge feeling of too good to be true but we're going with it today and all is well with the world.