Worth waiting for eh. When I left him, he was saying that he would have to leave some of the stones on the left hand side because it wasn't looking strong enough to support itself without them until it had been jointed, but he obviously reconsidered when he got to it. The greenery is stuff that has grown on top of the pile of stones in the ruin. You can watch the birds and butterflies on the ripe grapes without them noticing you :-) 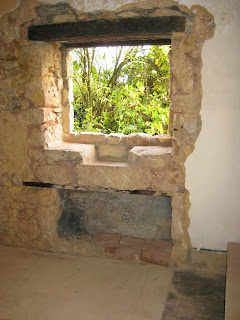 So now why would you brick that up and plaster over it to match down below. Then there is a fire and the whole lot is filled in with stone and plastered over. It makes me smile as to why you would have a window within two feet of next door's wall. And did the neighbours build their house first or after? 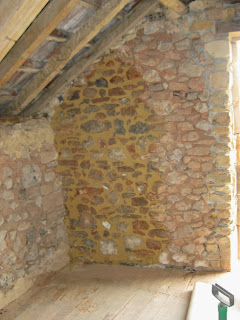 This is my first attempt at jointing. Him Outdoors so loves doing this that when he tried to show me how a few weeks ago, it was physically impossible for him to let me do it. This seemed to go alright but do I dare do the bit that will be right in his eyeline when he's in bed. (This bit will probably be mostly hidden by cupboard!) 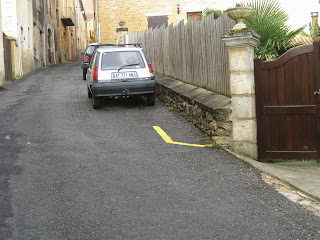 And since yesterday morning this appeared on the road just above the house. I wonder what that means exactly (all other parking spaces are marked by white or blue lines so it must be no parking in just that bit, mustn't it??) and what happens to you if you park on it? I did see the municipal police there yesterday and asked them politely what they were doing - nothing was the reply!