Called in this morning to see how the mason was getting on. Wow! 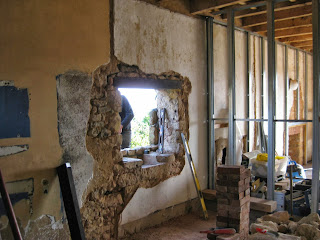 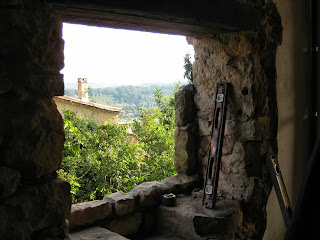 I think I might be spending some time in the toilet! 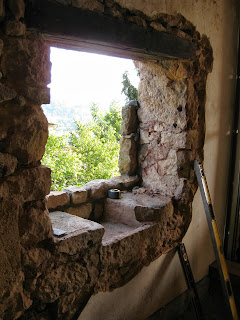 It's not very clear, but after our discussion of how amazing it was to find this and what a special view and general being pleased with ourselves, he pointed out a metal bar that appeared to be holding up the sink.
Shall we have a lookat where it goes? Ooooh yes please, now. And he fetched his drill and in two minutes had taken all the plaster off at the bottom and revealed that under the sink was infill too. Although some of the stones continued straight down, he didn't think it was a doorway filled with a sink, he thinks it might be a cupboard. So it was agreed that he would do the work that he expects to finish today and then if there was any time he would investigate the cupboard. Since he loves this stuff as much as I do, I can't wait to go and see tomorrow!