We started with this 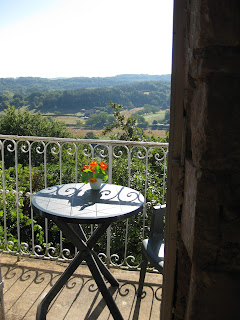 Very pretty balcony but unfortunately it turned out that the concrete floor was failing and while the scaffolding was up we took it down. There was a moment when these guys were going to save the day and build us a wooden one. Turns out that over the summer the guys have parted company. The one that is left is run off his feet and building his own house and lives 80km from us....... 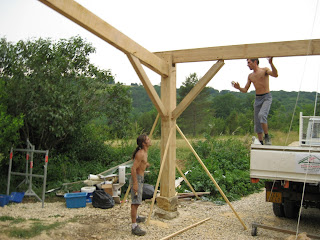 In steps the guy from down the road. Seems lovely, yes he can build a metal balcony, yes he can do it while the scaffolding is up, yes he can make it bigger while he is about it. He'll do the base immediately and then we'll worry about the balustrade next year because he can fix it from the floor. Brilliant. Then all goes silent. No devis (estimate) as promised, no appearance of balcony man as promised. 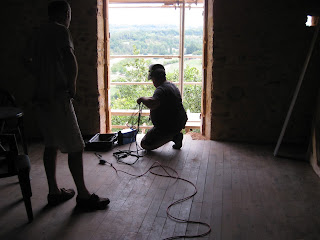 After two 'yes, I'm definitely coming' telephone calls and one complete mess up on my part of trying to explain that if he could possibly come and reweld a bit of metal that one of the workman had cut, before the mason came to do the window sill, my life would be perfect. He responded to another call with 'how about now' and here he is. Turns out his wife has injured her leg and she is in plaster and unable to put her foot to the floor for a month! He has a 15 year old and 13 year old twins, all boys, who all play rugby in different places at different times and he is run off his feet. So the only way we are going to get any sort of balcony any time soon and without more scaffolding is if we have one the same size. No choice. OK. Big sighs of relief all round and he will be there next week. Fingers crossed. And as we thought about it, because the window is bigger, the space to get round the table is also bigger so all will be well.
PS Thomas Hobson was a livery stable owner in Cambridge in the sixteenth century who said you could have any horse as long as it was the one nearest the door. Hence Hobson's choice. I can remember sitting on the bus with my mother, who was born and raised in Cambridge, as we passed Hobson's Conduit and she explaining it to me. Since Hobson's conduit was an obvious stream in front of me, my mother beside me who had been there as a girl, I am really surprised it was so long ago. I thought it was in her grandparents' time :-)