Went back today to admire the mason's handiwork in peace and quiet. Did a bit of cleaning, putting tools back in the right place and brought home the cake tin and teabags' jar to replenish. (Note to self, orange cake disappears quicker than ginger.) And sat with a cup of coffee wondering about the women who had used the sink and what their lives might have been like.
The mason suggested that the window might well have been blocked up because of window taxes in the old days. As he will hopefully reveal next week, the window would have looked out straight at the side wall of the ruin. 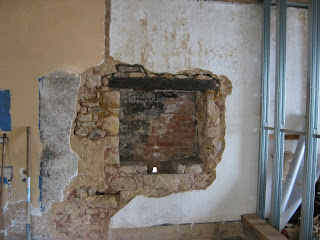 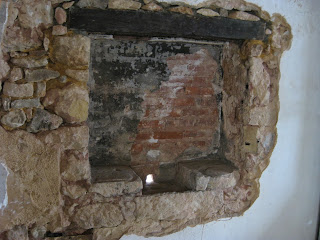 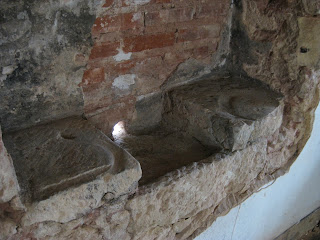 As you look closely at it, it is more evidence of a major fire in the house at some point. Various remains seem to point to the destruction and replacement of most of the woodwork.  And the wall at the back of this sink (which must be after the blocking up of the window) is black. Various stones that the mason has removed are black on one side too.
There are potentially three lintels over the window and only the central one remains. The mason has found an old one to put on the house side and we agree that if he couldn't find another old one, a new one would be fine on the outside. There is a huge stone and also a carved stone arch in the ruin, both of which seemed a bit over the top for the loo window that you can't see!
I wonder how old the house is? And how you tell when all houses are built in the same way for hundreds of years. The notaire promised to look into papers that he had. But since he still hasn't given us the house purchase documents from January,\I'm not over hopeful. Good reason for a visit to nudge him though.