Where do the days go?

It seems ages since I wrote anything but it isn't really. Nothing much has happened but there is a general feeling of turning a corner. Putting things back instead of ripping them out. We hope to reuse 5 of the old doors, so Him Outdoors thought he'd better check that they were possible to fit fairly easily when you haven't got the original frames or hinges. Shall we keep the wallpaper?? 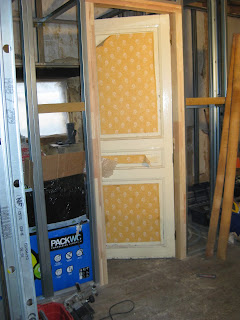 I have pretty much finished smearing what I've decided looks like breast fed baby pooh on the walls of the cellar. Just the bottom of the walls to finish off and much brushing off of pooh to make it look lovely. It takes ages to dry off enough to brush in this weather. 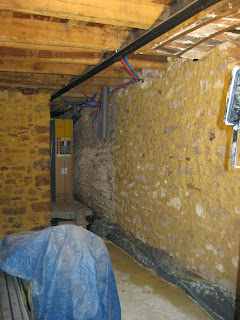 Super Mario delivered a cubic metre of castine (gravel) this morning, which Him Outdoors spread over the floor of the workshop. The big box is an enormous new water heater. 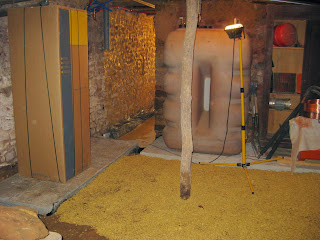 This lot was from a trip to the local DIY sheds yesterday. Half way through Him Outdoors rang to say that his card had been refused and could I ring the bank to find out what random limit had been reached and was there anything they could do about it. Turns out that the general opinion is that it is so complicated to raise the limit and it could only possibly be raised for a month unless we pay for a superior card - yes you pay for credit cards in France - that it would be better to use the cheque book which has no limit. No wonder there are such long queues while people painstakingly fill in cheques. 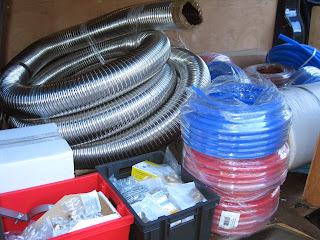