Apparently Him Outdoors has got to the end of his list!! Quick, quick make a new one.
The old kitchen - yes, that's all that was left - has had the rails put in for the electrics, pipes, insulation and plasterboard. Take out old sink, discover that its fittings are not standard, can't reconnect with bits we had (sigh) but Him Outdoors and the local Brico to the rescue and we can have tea again. 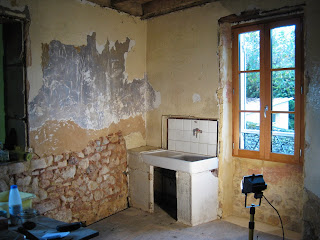 Also lots of time spent trying to work out the best way of replacing the cupboard frame in front of the plasterboard. 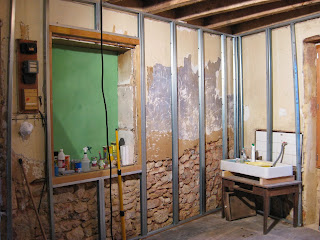 Sometimes this rail system feels like we are building a plasterboard box inside an old stone house. I suppose we are but there will be loads of old bits left and it makes it really easy for all the structural gubbins apparently.
This will be the downstairs cloakroom. Lots of debate as to the height of the ceiling. 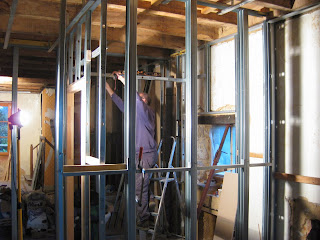 This will be the wall of the pantry/wine cellar. I've chipped out all the old wobbly stuff and put in some new golden. It is taking an age to dry so that I can finish it but it will look gorgeous, only 2 more walls to go. The wall on the left of the picture will be all golden but we are having a local professional in to do that - hopefully before the end of November. 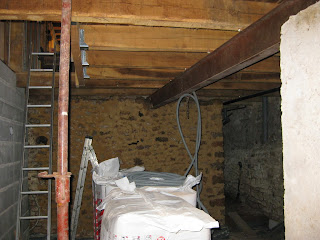 On the other side of the wall we have made  a concrete plinth for the oil tank. Him Outdoors has been digging out the cellar floor to make it level having realised that if we don't do it soon there will be no easy way of getting the soil out. 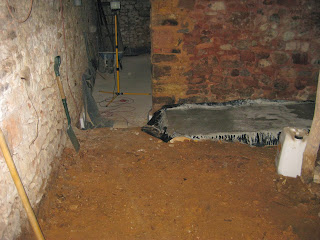 I spent a happy morning buying trees and plants I couldn't resist. And then an equally happy time planting them. Two apricot trees, a plum, and two apples and also a pomegranate which I have seen here as a tree but seems to come as a bush. Some of the garden turns out to only have about 4 inches of soil above solid rock so on Sue C's suggestion I had a lovely time choosing irises and then on the same theme surely pinks and rock roses would go well. We shall see - which is one of the joys of the whole game. 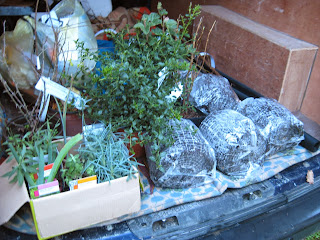 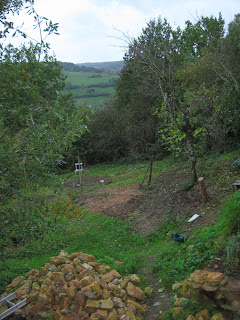