Little by little.
The beams that go into the wall on the front door side of the house are underground. They are nearly all rotten at the ends that go into the wall but completely sound otherwise. At the street end which will be his workshop, Him Outdoors has been building supporting frames out of timber. (Who knew that gibbet was a French word? Another 'say it in a French accent and hope for the best.) 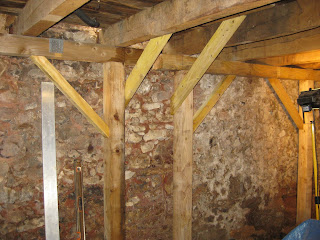 Confident that all was supported, he attacked them with a chain saw from the kitchen. Seemed very strange to be chainsawing inside! 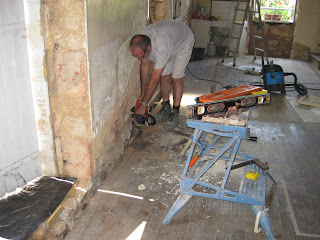 And he was right! The rotten bit was the bit in the wall! 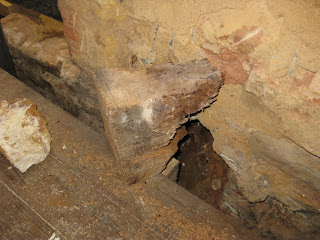 We have been fancifying the kitchen fireplace. New supports and plate. Painted and ready for ...... 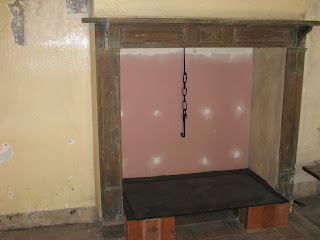 The new stove that arrived yesterday. The back plate was from the old house and we put it in painted black. But it detracted from the stove and you can't see it anyway. Bit of a 'well what are we going to do with it' moment. Painted cream you can see the pattern on it better and the stove looks better too. (Sue, the interior and the fireback are painted with Annie Sloan paint. Do I need to wax them if I am not intending to do anything to them. And do you think it will stand up to the heat anyway??) 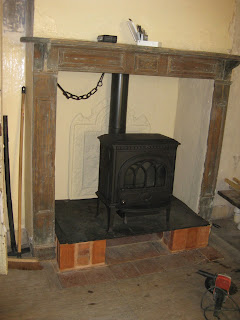 The beams at the other end will be supported by this block wall in the cellar which is being finished by Him Outdoors and colleague this weekend (fingers crossed). 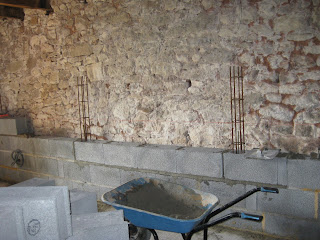 The sittingroom fireplace is now ready for fires too. Everyone else tells me that it will have to be another stove but I am holding out for at least a trial of an open fire. The exposed bricks going up the wall are just because the wall began to fall down, they will be covered by plasterboard. 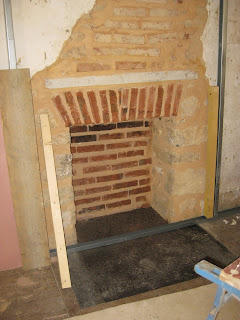