Last summer I happened to see a mother cat and her six kittens enjoying the sunshine beside a neighbour's pool. After a massive last minute strimming session before the neighbour arrived for their short summer break, she disappeared.

Over the next few months it gradually sank in that the cats now being fed by the family at the top of the road were the same kittens.

Then she disappears and several weeks later reappears in the road too often for her to have hidden them anywhere but in our ruin.

Then four kittens are seen playing on our garage roof with mother snoozing in the sunshine beside them. All goes well until two days ago when there is a squawk, a jay flies off, and then much pathetic mewing from the garden below the garage. (Do jays take kittens?) Mum spends most of the day trying to work out how to get the 'too large to carry' kitten back home. We tried to help her but she wasn't having any of that and we were obviously making things worse.

Today more plaintive wailing from the garage while kittens played on the roof and mum looked on.

HO climbed on the very precarious roof, knocked a hole in the felt and we retired to the balcony to watch. 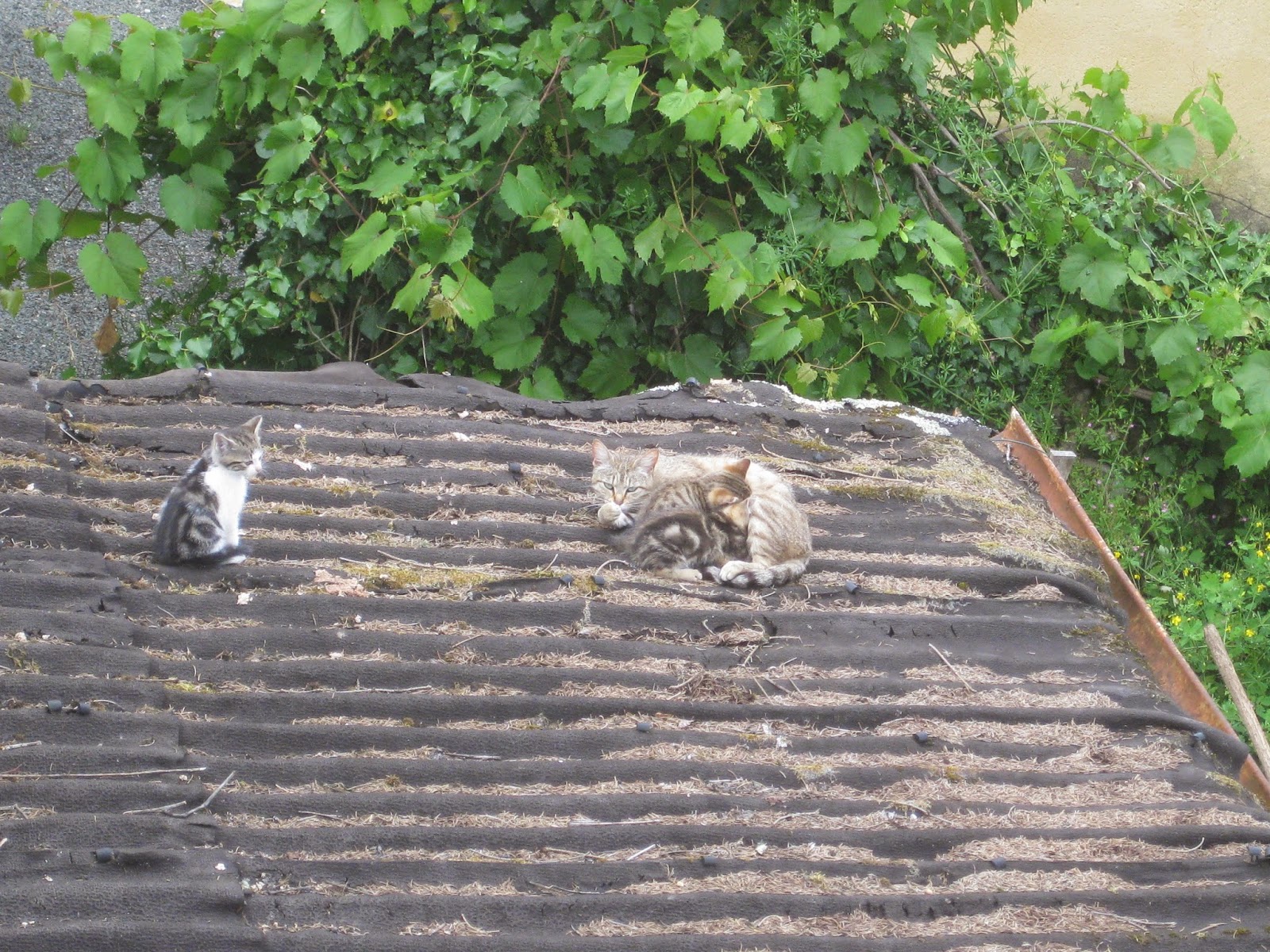 Aaaaaaaaaah
Now I'm up for paying for her to be spayed but there are now 10 offspring that we know of, and ugly white bruiser dad is still in the village. And how do you catch them anyway?﻿
Posted by Rosie at 20:01 2 comments:

Him Outdoors has been playing with his new toy. Brilliant gadget which lifts the huge pieces of plasterboard and means he can fit them by himself. Yippee. 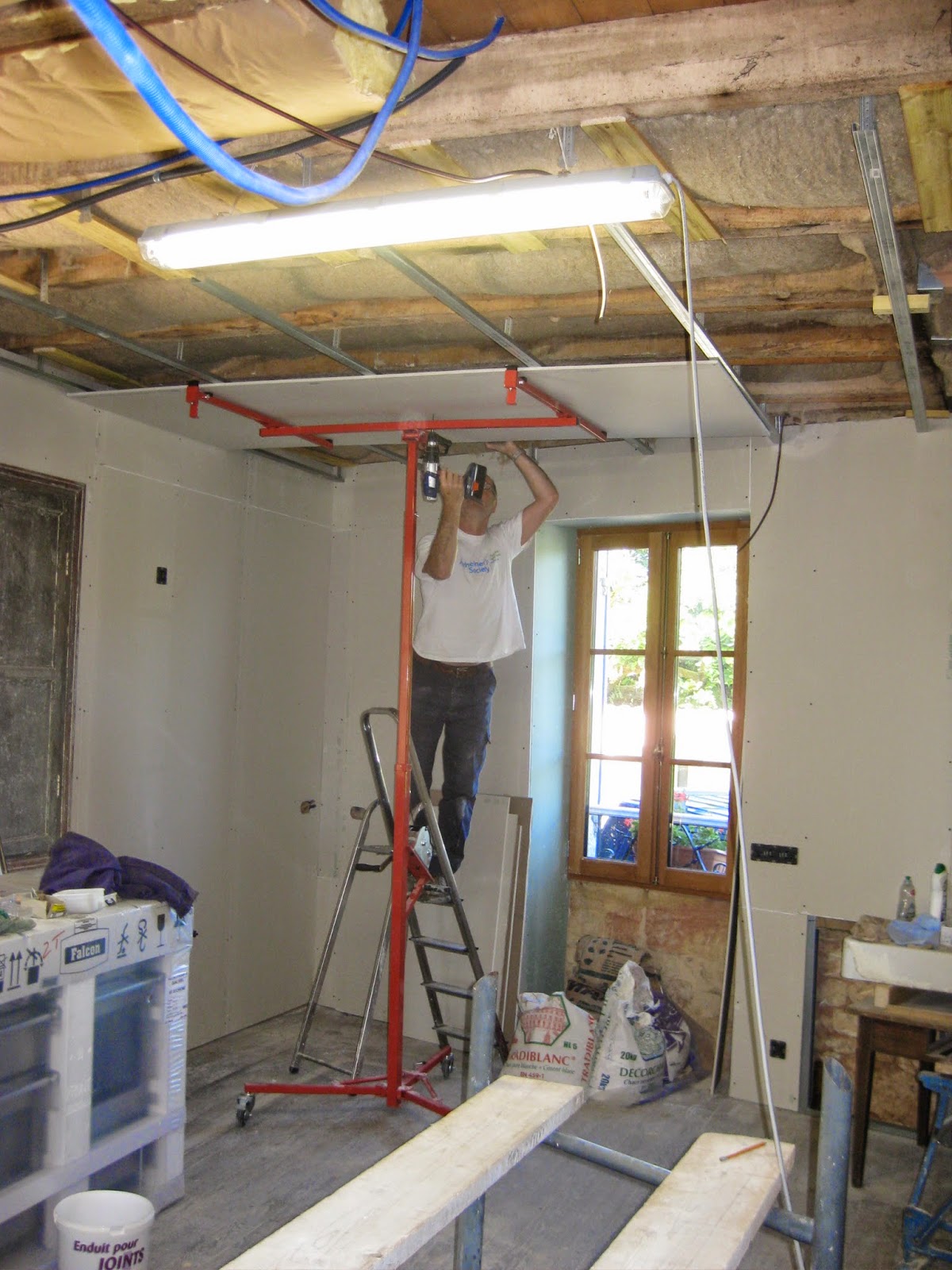 This week we have had the plumber and electrician here and each time they see me lifting the other end of one of these huge pieces of plasterboard they move in and take over. I feel very cared for ............and grateful.
HO has taken off the front door and filled in the bottom half with blocks fronted with stone. There was so much wood surround on the door that it is amazingly much lighter. (We do plan to reuse the door.) 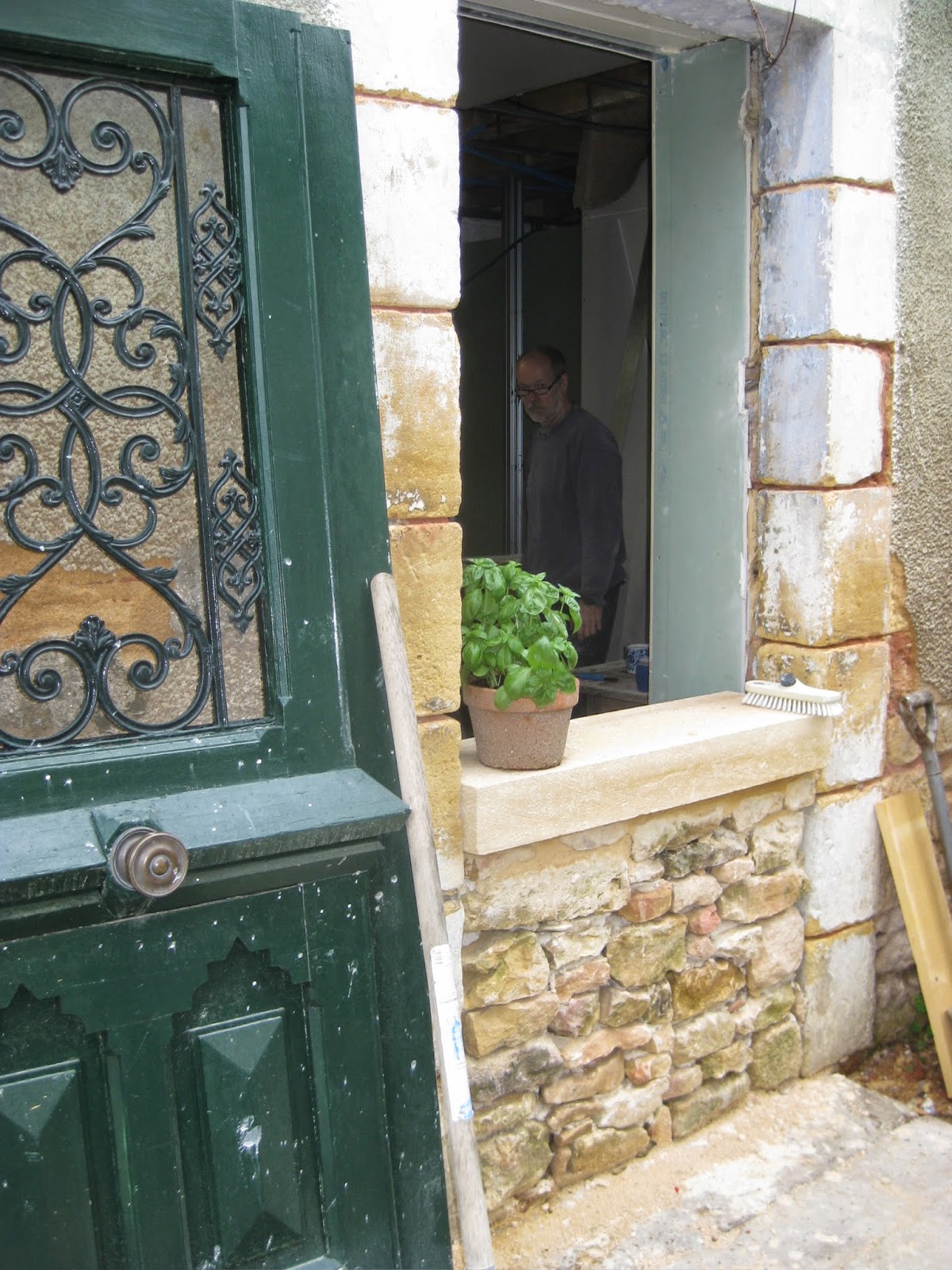 Today's main event has been the removal of the toilet from the kitchen. An essential but rather exposed toilet! All HO's endless planning and placing of plastic waste pipe was stuck together this afternoon and this has disappeared..... 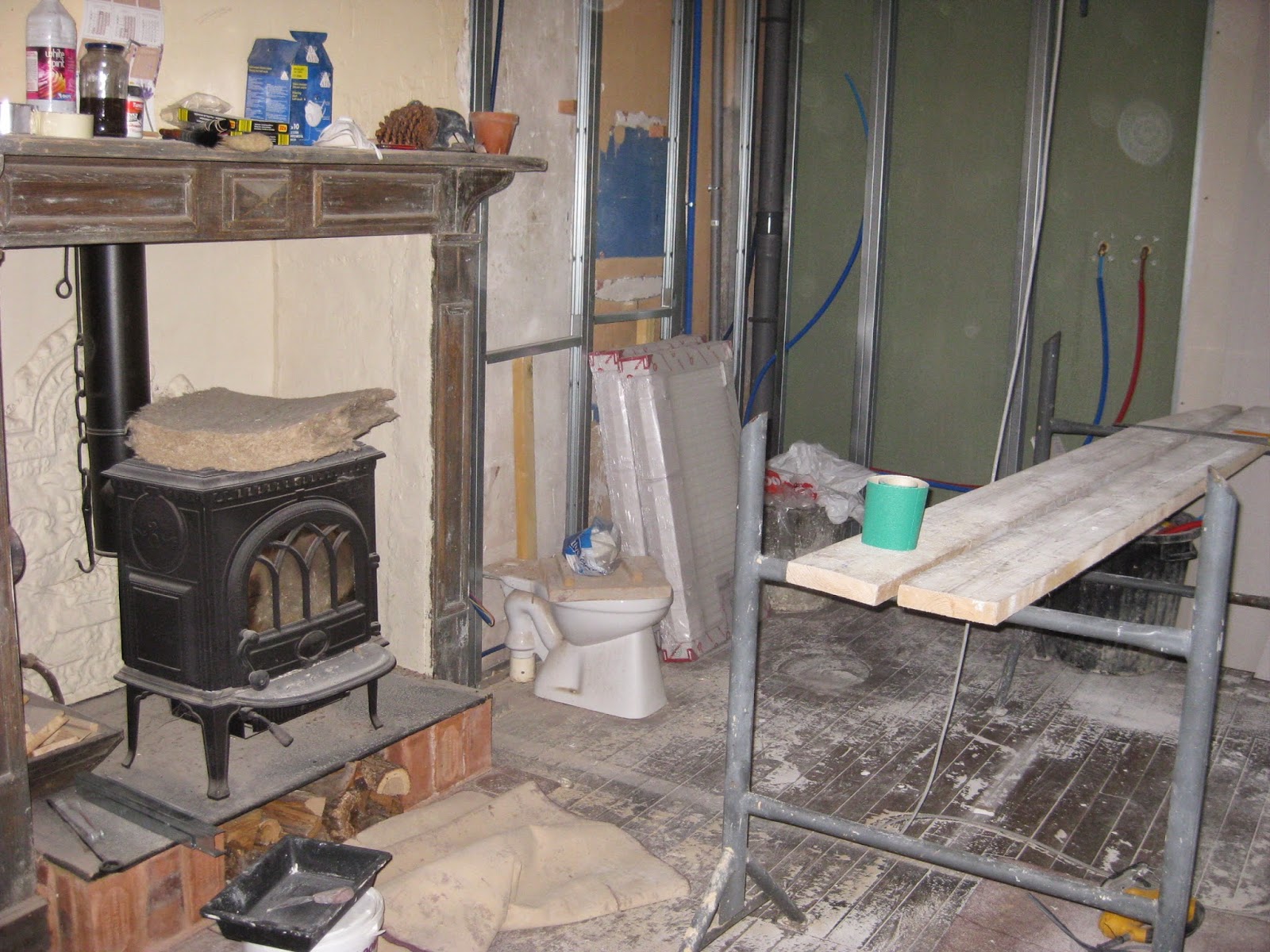 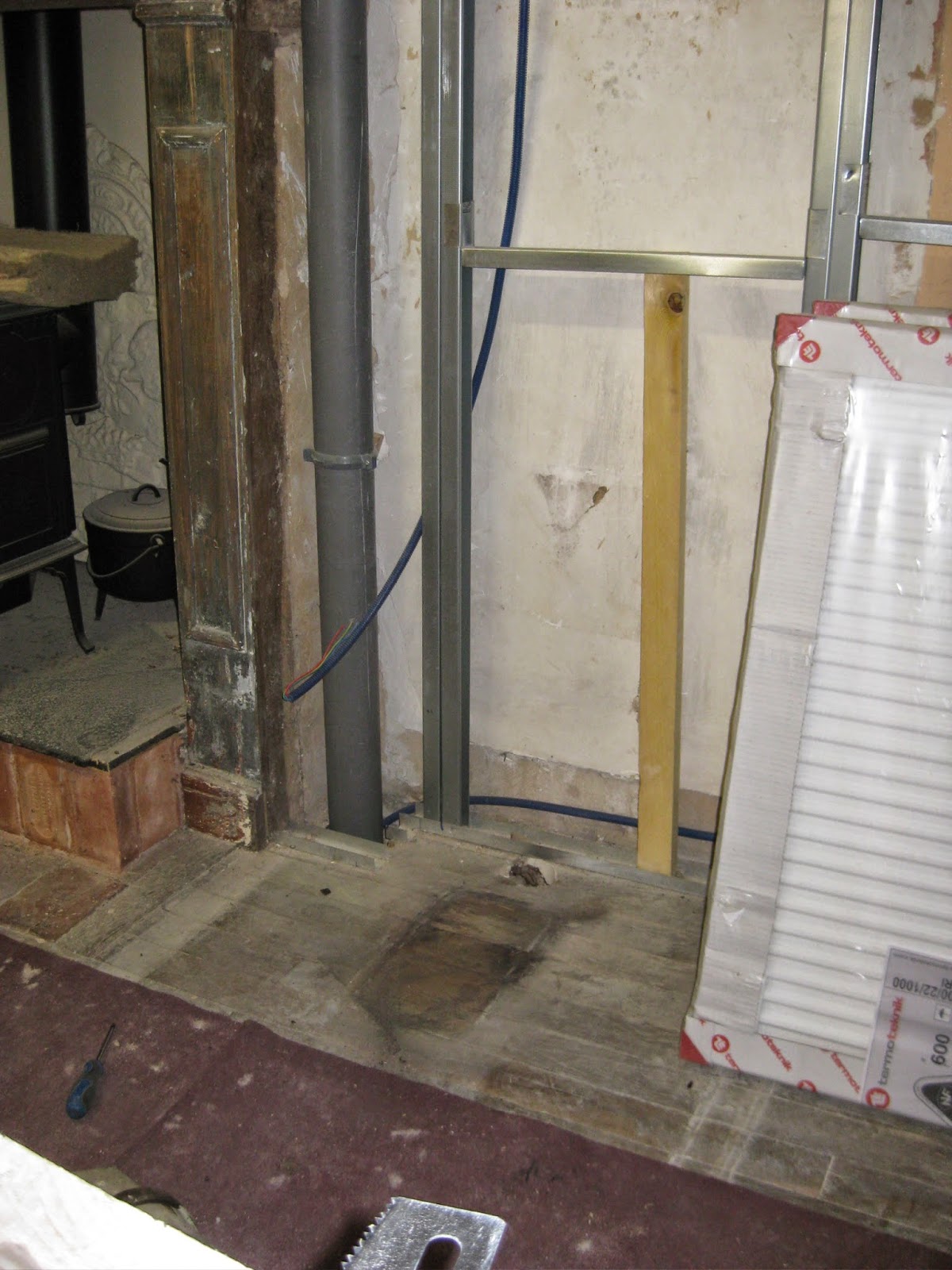 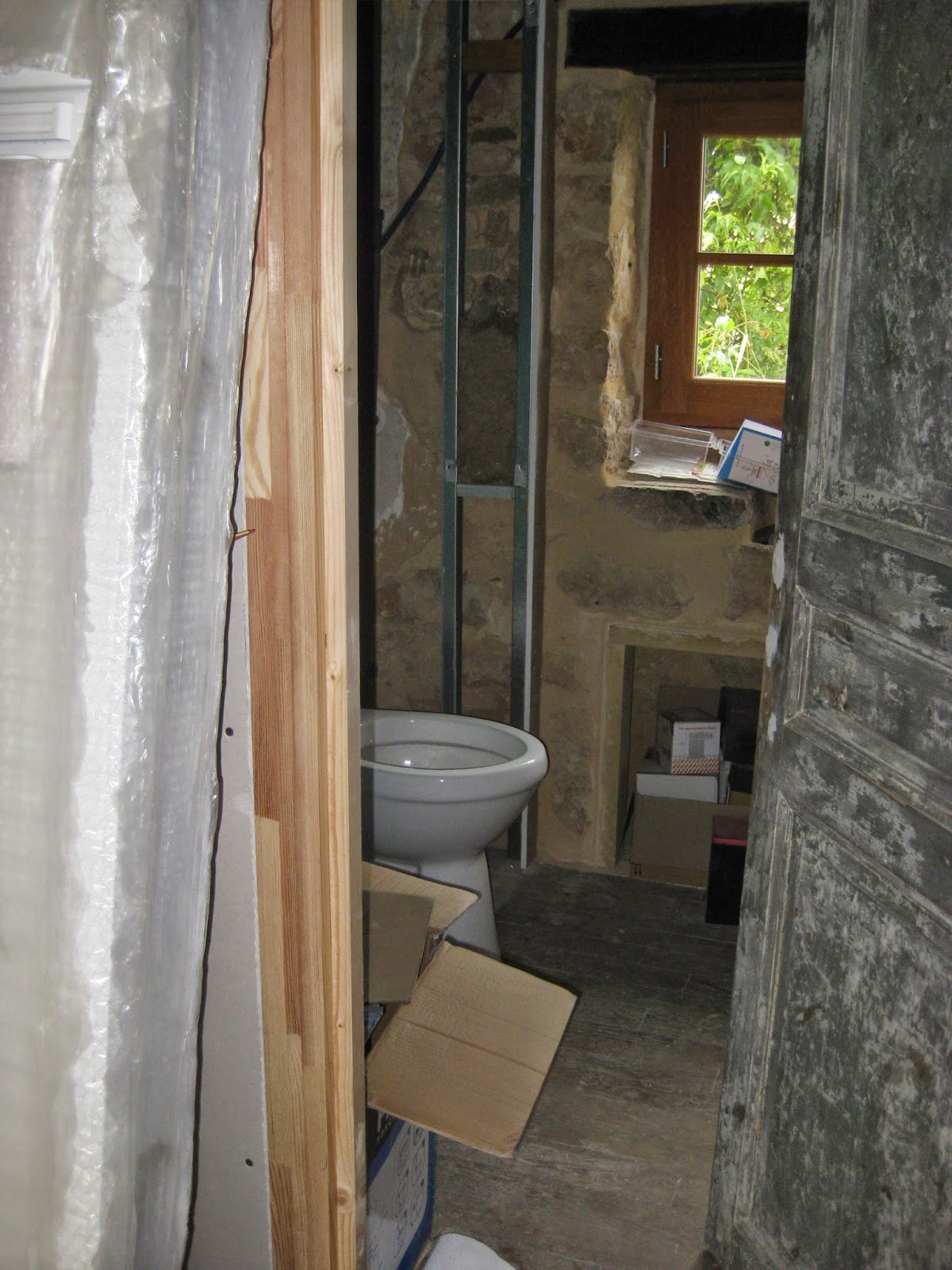 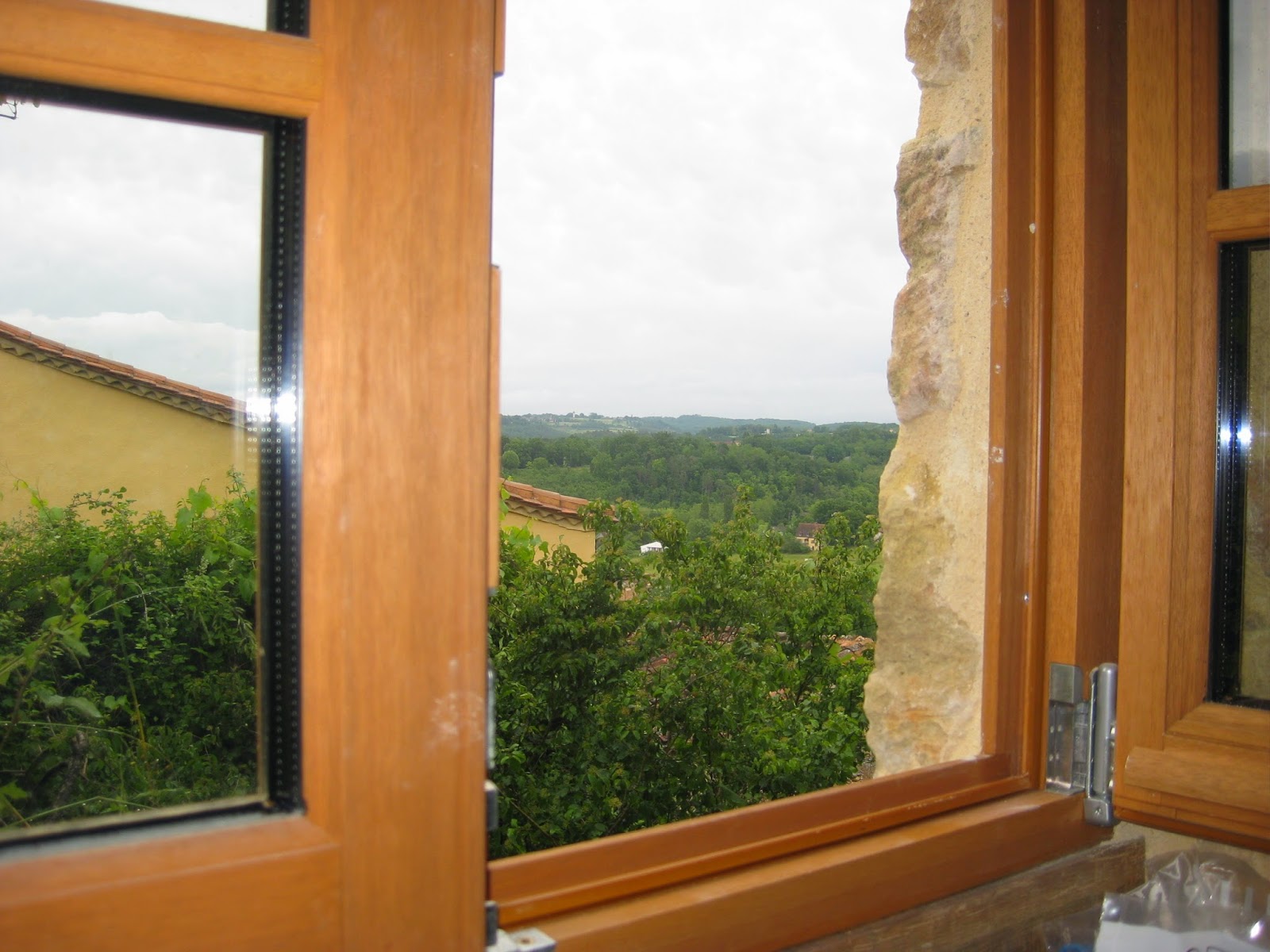 Sorry for not having written on here for a month. Time flying again.

Had a lovely week in Paris, really lovely. Walked miles and miles, did lots of stopping to look at the people and some stopping to look at the sights. Fantastic meal up the Eiffel Tower courtesy of my lovely children. Spectacular night time tour of Paris courtesy of our kind landlords. (Slightly unnerving to stop on major roundabouts to show us a view and give us the complete history of what we were looking at but hey.)

We are at the stage of painting beams! We are painting behind radiators as the plumber fits them. I am still glooping joints on the ground floor. There were so many people needing ladders and space this afternoon that I was nipping in and out slapping gloop on available joints.

Yesterday I spent the morning on the phone and have arranged for the electricity power to be increased from just enough for tools and arranged for a man to come and look and see if the phone works. This morning we called in on a TV man who will come and see which of the assorted metalwork on the chimney actually works. The plumber has been here for several days and we seem to be nearing heating. The electrician has covered various plugs in pretty see through red which apparently is a step forward. Because the plumbing and electrics are being done we can close up various walls. So it all goes forward slowly, slowly. Him Outdoors keeps saying two months, every week it's two months :-)