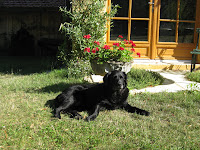 We decided that Sweety should be chipped and passported so that if we ever had to go back to England suddenly we could do so relatively easily. There had been mutterings when we adopted her that 'they' were thinking of changing the rules for dogs entering the UK but decided that French bureaucracy moves mighty slowly and we would do it anyway.

Sweety was duly taken to be chipped and given a rabies injection. Oh no we can't do that today, the computer says she is still registered as belonging to the pound and we can't chip her without the document that directly relates her to you.

OK. Emails sent, phonecalls made. Apparently there is one office in the whole of France that deals with updating dogs' details and the only way to get this done any time soon is to contact them directly and you get to the top of the list.

In the back of our minds was a vague, possible plan to go home at Christmas time and since this whole process takes 7 months we were on the verge of missing it.

Paperwork duly arrives. Sweety is chipped and vaccinated and the next bit could be three weeks instead of a month later so we might just get home for New Years Eve. C'est la vie.

Last week we go for the blood test. Sweety is now desperate to go to the vets where she gets extra biscuits and triangles of what looks like Dairylea Cheese Spread. Rushes in. All OK. Pay the 120 euros that it costs!!! (Blood tests for Him Outdoors cost 12 euros. Blood tests for dogs cost 80 euros.) All being well we can now get home for New Year's Eve - although too knackered to do anything like celebrating.

So if we delay our trip home 24 hours we don't have to do all the blood test stuff.

We decided to cancel the test. It now occurs to me that if we go through customs on New Years Day we will be the first people through the French customs with the new English laws. Hmmmmm (and after they've been celebrating too).