One of the biggest differences about the french fairs and the equivalent in England is the way that people eat.

At La Felibree with your entrance ticket on the day you can buy a ticket for one of the sit down lunches. As locals we have booked weeks ahead for a sit down lunch which was being held at the school.

As I walked through the town to meet my knitting friend every single seat was taken up with people eating. Every available possible restaurant space was open and serving sit down lunches. The streets were empty at 1.15, everyone was eating.

Whilst we were knitting, we were watching the passers by and no adults (repeat none) were eating during the afternoon. The only eaters at all were two children, one with a drippy ice cream and one with some candyfloss. This is a huge cultural difference between the french and the english. At an english fete there would be a long queue at the ice cream van, there would be a tea tent at least and probably someone selling hot dogs or burgers. No idea of feeding people to a sit down lunch, you would have eaten before you went or had a picnic - probably in the car park. 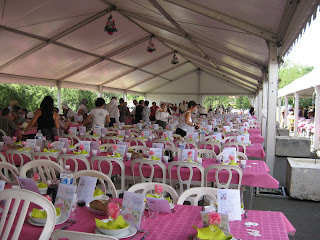 Beautifully laid tables already having bottles of chilled water for the hot people that had just walked up the hill from the town on one of the hottest days we have had. We had an aperatif of vin noix, soup, foie gras, confit du canard, haricots, fromage, dessert, coffee, endless bread, wine and water all served and cleared promptly by smiley waitresses, everything that should be hot was piping hot and everything cold was chilled. Absolutely amazing organisation and it tasted delicious too. I knew they could do the 500 people that they usually have for Bastille Day but 1,000???

After we had finished this I went down into the town to see the flower making ladies who were doing chores from their farming days. Paulette was bunching up the tobacco leaves for drying. She said that these weren't cut right because they should be pointy and she and her neighbour were both saying that their fathers kept an eye on what was happening and made them do it again if they were wrong. Her neighbour was cracking walnuts on a stone slab on her lap which I have seen before and another had obviously been husking sweet corn for the chickens. They did look hot but were pleased to see a face they recognised.

I learnt from Madame Mazet in the Post Office this morning that they had served 250 omelettes aux ceps at Sunday lunchtime. When I suggested that that was an awful lot of eggs she said that they come sterilized in cartons!!! As does the milk. So much for local produce! Incidentally I noticed an item in the local paper this week that said that organic farmers were being allowed to feed 'other food' to their animals at the moment because it is so dry and there isn't any feed. Hmmmm.