Well, our 6 months of Tuesday afternoons of flower making have been worthwhile. The streets of the town look absolutely lovely and ours have made a superb effect. This and a pink street the same are gorgeous. 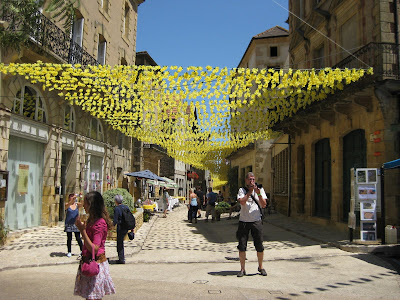 I had arranged to knit on a stand for La Filature which is a restored woollen mill that I go to for
Cafe Tricot on a Sunday afternoon in the winter. They wanted volunteer knitters in costume for the afternoon. 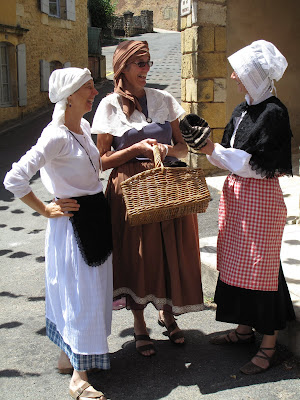 Here we are, ready to go, gossiping with a friend from the tourist office. 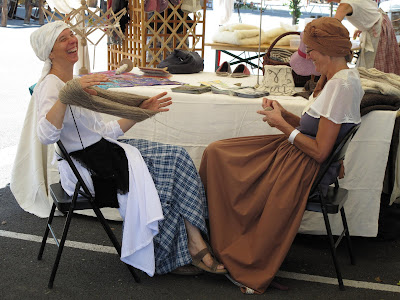 As you can see we had a really good time! We had been given no idea what was required of us really so in an attempt to look like knitters from the olden days I had been down and bought some skeins of natural coloured wool and picked out my wooden needles. It was very, very hot so we didn't really want to knit at all so we wound wool very, very slowly!

To begin with there weren't many people about. But when everyone had finished eating they began to appear. Over the afternoon we would keep catching people (men especially) gazing fondly at us wool winding and then they would say that they remembered doing that for their granny and remember a happy time. We also had people saying that they used to knit up wool from their own sheep, or their mother used to take wool to the mill on her bicycle. One woman said that in the war she couldn't get or afford needles so had knitted with bicycle spokes.

When we started knitting something I was knitting a woolly hat on circular bamboo (and plastic) needles and this was a great novelty. Lots of women wanted to have a go or have a good look. Some even wanted to buy my woolly hats but when it came to it I couldn't bear to part with them! I said they were my samples and not for sale and offered some of the professionally knitted ones at 20 euros!

By about 5.30 we'd had enough of knitting and went to have a look round. Most of the stuff was familiar from the various medieval fairs and there was a lot of tat for sale. We had a look at the Josephine Baker exhibition (she was a local celebrity) and promised to come back and read properly the exhibition of the local women from the resistance. Then went back to Anne's to sit in the shade with a glass of wine. The guys were full of stories of the vintage cars and the local village beauties that had been parading in them and we swapped all our stories.

In the evening we wandered about the town which was still buzzing and then went to a free concert of these people:


Brilliant both musically and that they were a female group.
Posted by Rosie at 11:08