Started at last. Him Outdoors strimmed the back garden on Saturday.  Huge bonfire and we
have space to imagine.

Today we brought over the bench and chairs that belonged to my parents and my father's parents before them. Something hugely connecting to be sat in my new garden admiring my handiwork somehow in the company of my mother and grandmother. (I realise that it is not just a female thing but it feels like it.) 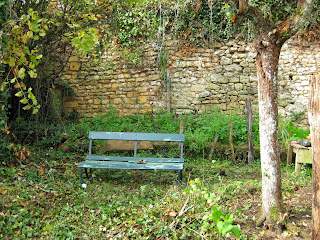 This is the view from the bench. Halfway through. Dug one bed which was originally for raspberries but then after sitting on the bench decided that the asparagus would get more sun (and appreciate it more) if it had that bit. Dug another one for raspberries to its right. Am now totally knackered! 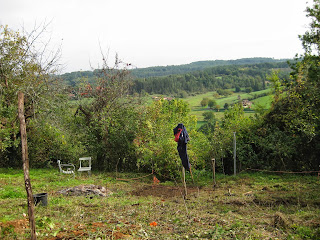 The jumper is hanging on the middle post of the washing line. There are huge lumps of concrete with holes in them to hold posts running down the garden. For the moment, I have left paths under it so that I can hang out the washing. And here's the view from the balcony. They look much smaller from up here :-(
The soil is lovely. Dark brown and crumbly and although there are surface weeds there is very little at any depth. And only one worm!
Posted by Rosie at 21:16