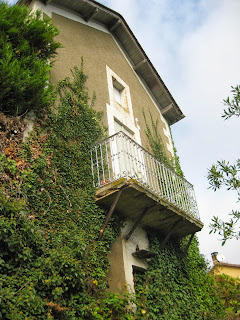 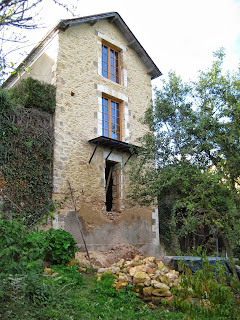 Him Outdoors has also cut down the hedge. Not quite sure why this hedge is here. We don't own the bit of garden on the other side which is between the front garden and the view. At some point, someone has planted leylandii along our house wall and between us and the view. We politely asked the next door neighbours if we could cut it down a bit over the winter. They agreed. At least I hope they agreed, because it is too late now! 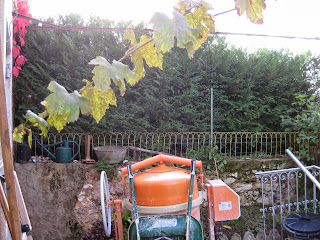 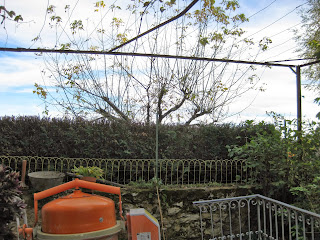 It's still 2 metres high on their side which apparently is the legal limit and they did say we could! It makes a huge difference to the light in the front garden. Also today another neighbour popped in to admire the house and view and was completely, racistly scathing about the Parisiens who live next door. Apparently it is she who has had the yellow line in the road put in because they were so difficult about leaving a metre of space so she could park her van, that she has had the mayor put a line and if there is a problem in the future, the gendarmes can step in!
Today was also the first day after the summer that we are able to have a bonfire. We have got rid of such a load of stuff and apart from the heaps of stone from the enlarged openings and the piles of wood, the garden is beginning to look respectable. And also, because it was such a glorious day, possible. 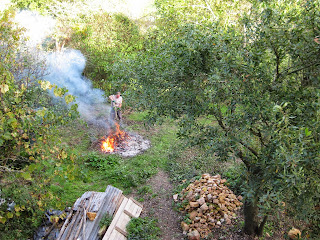 This is a picture of the new kitchen window. Love it, perfect double glazed replacement of the old one. (Apart from the handles which are coming later.) 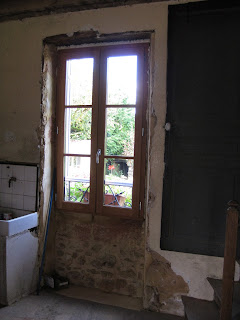 This is the wrong one for the spare bedroom. Which had been reordered with only 6 panes to match the kitchen window which it is above. 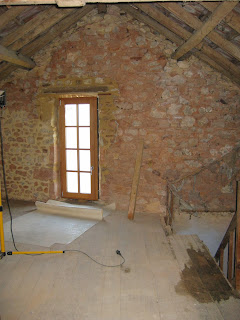 This is the sitting room window. To be honest I wish we had divided it into 5 panes high, not 6 but it is better to match the other ones that are already there. But the balcony floor is in, scaffolding now removed and it is absolutely spectacular. 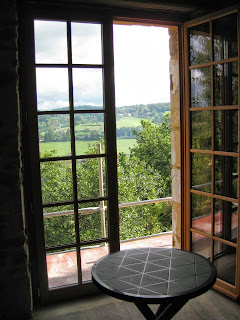 The view from our bedroom window is so lovely, I spend ages gawping. (And the proportions of the window panes are better too.) 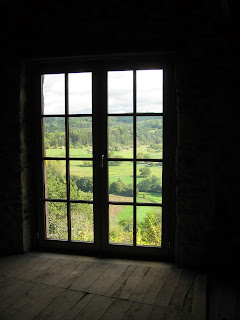 Today I finished the end bedroom wall jointing too. (This is a nearly finished photo.) 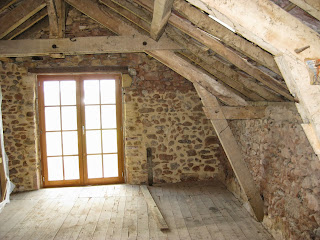 At the end of the day Noam (like Noah but Noam) appeared. He is happy to do the screed for the cellar floor on top of the underfloor heating - no problem. So now we have to investigate pipes, insulation, and all the gubbins that is involved in underfloor heating. He will also crepi the breezeblock wall - no problem. Lovely guy that speaks enough English for Him Outdoors to be able to communicate well with his French and also son in law of the local builders merchants!
Also. yesterday I popped in to the Mairie to get some recycling bags and to check that they are still thinking of having our tree for a Christmas tree. If not, we will have to think of getting it cut down. Today the guy rang back announcing he was from the Mairie. OMG what have I done, what have they found out, help.................. what it is to have a guilty conscience :-) it is all fine, they will come at the beginning of December to cut the tree.
A good day.