Marrakech - I wish I liked it more

We deserve a few days in the sunshine. We met 40 years ago last week, that's worth celebrating with something exciting. I have been dreaming of a Riad in Marrakech that I had read about several years ago in a book called Cinnamon City by Miranda Innes. Riad Maizie. So we booked and it was as charming as I had imagined. Done up with a wonderful eye for all things Moroccan, it is a really beautiful oasis in the middle of all the chaos that is an arab city. Slightly shabby after having been well loved for a decade but charming. 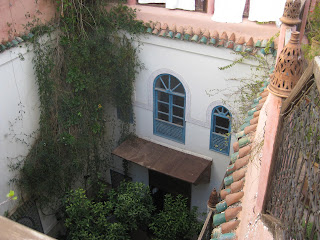 We arrived very late at night but were met as arranged and escorted to our riad down the maze of little alleyways that are the medina in Marrakech. Comfortable room with an amazing Moroccan painted ceiling that was everything we could hope for.
After an excellent breakfast, we were shown the way through the souks to the money exchange and were left to explore. Wonderful bright colours, endless heaps of fascinating objects. Soon sat comfortably in a roadside cafe with delicious orange juice we watched the world go by. 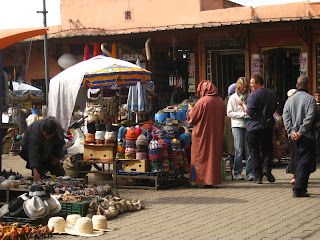 On the second day we boarded the tourist bus which circles the city allowing you to drop in on the various sites. I wanted to see the Jardins Majorelle which were designed by Yves St Laurent. A beautiful oasis of shady green. 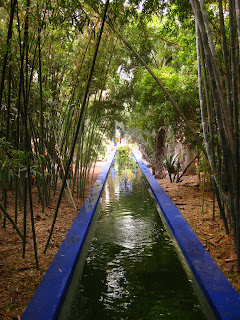 One night we went to the large square to eat as Jamie Oliver had shown on one of his programmes. Lovely sounds and smells, delicious food. 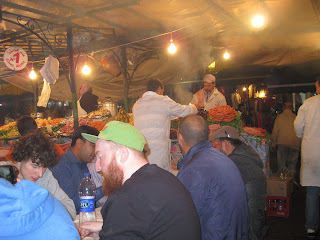 So what's not to like?
Well, the weather didn't help. It was so cold, and pouring with rain for a day and a half. It has to be sunny and you have to be able to live outside.
It is expensive. We went out one afternoon determined to buy something. The received wisdom is that you expect to pay about 1/4 to 1/3 of the asking price. Well when they are starting at £35 for a shawl, that's a silly price for a souk shawl. Food is expensive too, pretty much what you would expect to pay in england for a restaurant meal and even the street food soon mounts up.
But mainly it is the perceived attitude of the locals. They appeared to me to be so angry all the time. Every day there were guys fronting up to each other and yelling at each other in the souks. Explosions of yelling between stall holders.
Every time you look a tiny bit hesitant someone will appear to help you find where you want to go, to invite you into their shop, to show you just where you can buy spices, take you to the tanneries or whatever. Initially, oh how kind, but always, always for every little thing money will be demanded.  I know times are hard and I know I shouldn't be surprised but I find it really intimidating, irritating and exhausting.
If you are standing in a square, someone dressed in something Moroccan will come and stand in front of you and demand money for looking at him. If you are sitting in a cafe, someone will start acrobatics in front of you and then demand money for looking at them
We spent one afternoon being permanently gentle, smiley, charming and slowly wandering through the souks. Determinedly answering every demand with a polite no thank you and a smile. Smiled till we had face ache. Didn't cut down on the hello, hello, madam, madam but made for a gentle afternoon.
So, interesting, challenging, not hurrying back any time soon.
.