It's time for the harvesting of the walnuts and the chestnuts in this part of the world.

Him Outdoors has been wandering the roads around trying to find walnut trees that are not the special trees of the local overall clad ladies. Although we have about 6 acres of wood we only have one spindly walnut tree in the hedge between us and the neighbour. He only has one on the roadside which is very old and doesn't yield very much (he's no longer with us by the way, so I don't think he minds what we do!)

We do ,however, have some amazingly enormous sweet chestnut trees which seem to have marked the chemin 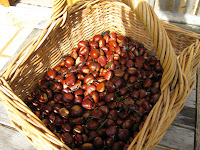 rurale which disappears into the wood. It has been a lovely experience on this damp misty morning to go down to the very drippy ancient woods and scrabble amongst the wet leaves for a basket of chestnuts. Maybe it's that we have been to see the cave paintings at Lascaux this week but it is very easy to imagine that women have been gathering nuts from here for centuries.

I have just read that up to the 1914-18 war it was only during the chestnut season that some people managed to fill their bellies. It is hard to see how important this crop must have been so recently when you see how abandoned the chestnut woods are now. Apparently the trees were as well looked after as the walnut trees are today and chestnuts were as important as potatoes in some areas. The trees are still harvested for wood but there is little evidence of collecting for food on a more than individual basis although they are still sold on the markets.

It was lovely to gather a basket of chestnuts that you can eat. As a child my brothers and I would be taken to gather bags of beautiful glossy brown conkers. The family would all go to whatever was the local conker tree road and spend the afternoon kicking through fallen leaves finding these treasures. All the children had to have conkers that you would take home, pierce with a skewer and thread on a string. There were schemes afoot to soak them in vinegar or bake them in the oven to make them harder so that they would be harder than your opponent. That side of it never seemed that important, but I do remember loving stamping on the prickly shell to reveal the beautiful conkers inside. I would then be unable to resist gathering a bag full for no reason other than how beautiful they are. This bag would then be left in the bedroom to fester until Mum threw it out in disgust!

OK, I've picked them but what to do with them????? Back to the wondrous Google - don't know how I ever managed without it - and also to totalfrance.com which is my first port of call for all things french and find that someone's french neighbour says that if you soak them in water for 8 days (not a week mind, 8 days) then dry them they will peel really easily. You then just grab a handful from your storecupboard, peel them and tumble them (sorry couldn't resist that from Nigella and her sooooooooooo irritating new series) in with roast potatoes or whatever you're roasting. This had better be right because I have now got two large buckets of soaking chestnuts!

An article in the supplement of the sunday paper says (in a somehow very French way) that apart from numerous minerals and protecting against pancreatic, oesophagus, rectal and prostrate cancer, they also lower cholesterol - who knew! 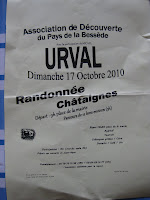 While we were at the animal market last week, we picked up this notice about a local walk. Him Outdoors decided that this would be an excellent way of getting exercise/meeting people/start getting into training for his new project which is to walk some of the Camino de Santiago de Compostella with his sister, for a month this time next year. Seems like more of an excuse for a blow out to me but who cares :-) 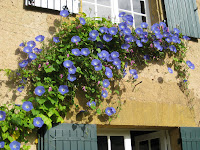 And while I'm posting - look how lovely my morning glory has become. Patience is definitely a virtue.