From one bar to the next

A Spanish holiday from one eating place to the next. Brilliant time wandering from bar to cafe to restaurant and back, interspersed with the odd 'sight'. (Have decided that we have been sight seeing not site seeing.) 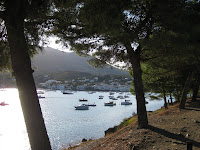 Chose what turned out to be a lovely secluded hotel above the harbour in Cadaques on the coast between the border and Barcelona. After we'd booked it we read that the Chinese had been there measuring up the town to make a replica of it in China as a representative Mediterranean village! Actually managed to be sitting in the sun outside the perfect bar on the edge of the harbour as the sun set over the opposite hill. And eating fantastic fishy tapas.

As a holiday, we have never been to places that sooooo many people also want to see. We were told that Barcelona airport handled 30 million people last year....... 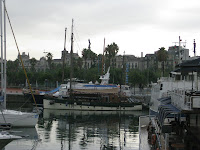 Stayed on a boat in the harbour. Brilliant choice for central staying in a great city. Lovely to be sitting on a boat in the sunshine watching the world go by again. Walked all afternoon around endless beautiful streets interrupted by sitting in the sun in bars. Odd venture on to the main drags that transport the tourists from one sight/site to another, then scurry back into the back streets feeling very country. 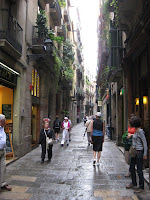 Had dinner in a tiny cafe filled with Spanish people. Laughed our way through another ordering adventure and ended up with six different wonderful dishes and as much beer and wine as we could comfortably consume bearing in mind the sloping gangplank to get home.

Overnight the weather changed. Rainstorms. Leaky boat. Mopping. Beautiful breakfast in the cabin. Then set off for a very wet day of viewing the things everyone else was seeing. Discovered that Barcelona was shut for repairs! Started at the Maritime Museum since that was where we were and it opened first. Showing an excellent display of Russian painting ?? but no boats. Walked up to the opera house to find a huge queue and a delay so gawped at the outside which is amazing and decided to come back later. 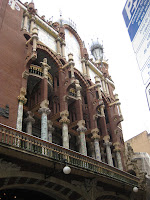 Set off again and had a coffee in a tiny wood panelled corridor of a bar in a passage through one of the buildings along the street. Walked to the Sagrada Familia where we joined the queue behind (and shared the umbrella of) a Chinese American who was in Barcelona lecturing at an international medical conference. Turns out most of the cathedral is shut, no tower visiting but a fascinating exhibition in the cellar that showed how Gaudi's inspiration came largely from nature and how the building was being repaired/renewed/built.

Map getting a bit soggy by now but have been inspired to find more of Gaudi's buildings. Unfortunately this means finding more of the tourists and since they are all soggy too and we are crap at doing the 'right' sights we found another bar!

Given that there are so many tourists we had a lovely time with all the waiters/waitresses/bar staff that we came across. This one had a sweet smiley girl behind the bar that we decided was one of the waiter's girlfriend/relation. Lovely girl but thick as sh*t. Knew no prices, couldn't add up, didn't know what was available but nobody minded and the 'dear God what has she done now' glances flashing around between two guys who were serving three course lunches to a tiny crowded restaurant were hilarious. Sitting at the bar munching our sandwiches we were amazed at how many of the suits lunching were drinking coffees that were half brandy!

Set off again in a vaguely harbourwards direction. Passing more enormous queues of pale, overweight tourists. Aimed at the 'best market in Europe' and couldn't get near the entrance for the hoards. But that meant we were meandering down the Ramblas watching the human statues frightening the children. Listened to street musicians in more beautiful squares.

Next day dawned sunny. Hooray. Leisurely breakfast on deck chatting to the owner then off to Monserrat. Amazing monastery nearly at the top of a mountain. Little train up to the monastery 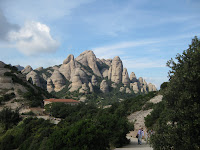 then cable car up to the top of the mountain. Then walked down to the monastery again and little train back. Fantastic scenery and kind weather made for amazing views.

Homewards towards France. Spent the day driving along minor roads through the Pyrenees. Stunning scenery. Total silence apart from nature. No other people at all. Wonderful.