This morning a lovely box of tiny peaches was left on our front door step. I think it was Madeleine, the farmer's wife from up the road, who probably left them. She will have dropped them off en route to one of her many cleaning jobs. I'll try and catch her when she flies by at midday to prepare George's lunch. 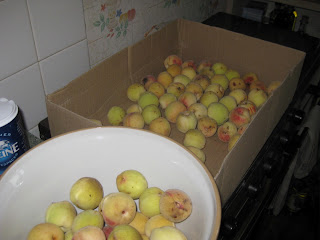 1 kg vineyard peaches weighed without stones and peel
400g sugar (or more if the peaches are not very ripe)
juice from 1 lemon
40g pectin in powder (not necessary if you like a runny jam or if you cook it long enough to be dense)
200 – 300 ml crème de cassis
Put the peaches in boiling water for two minutes. Take them away with a slotted spoon and place immediately in cold water. After a couple of minutes the peel will come off easily with fingers.
Remove the stones and cut the fruit into small pieces (do not throw away the juice!). Weigh it.
Put the fruit, the lemon juice and a couple of tablespoons of water into a non reactive pan and cook on a rather high heat until the peaches become soft. Stir it often and watch the pan constantly (if there is not enough liquid they will burn). Add the sugar and simmer on a low heat for ten more minutes.
Add the pectin and more sugar if the jam is not sweet enough, stir it and cook for another ten minutes. Put aside.
At the end, before filling the jars, pour the crème de cassis and stir the jam once more.
Spoon hot jam into sterilised jars, cover with lids.
Leave the jars to cool.
Not sure mine are vineyard peaches but hey, and you only add the cassis at the end so I can see how I get on.
Then the big saucepan and jars..............................hmm 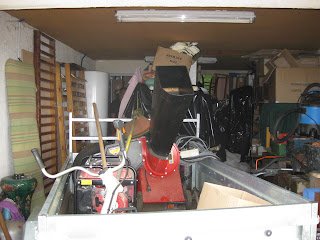 Somewhere in amongst this lot, Him Outdoors has hidden them. You can just see him behind the water tank and look what he found, bless him. 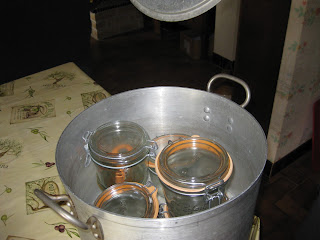 And a couple of hours later, interrupted with more house discussions, washing and general Saturday morning stuff, I have this and Him Outdoors has gone off to get bread for lunch and lemons and sugar. 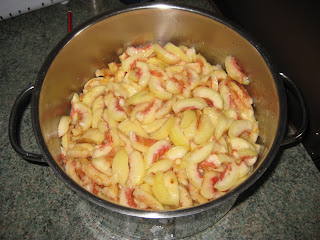 Well, it worked. Not hugely tasty jam I don't think and when you add cassis to it, it tastes like jam with ribena to me. Maybe it will mellow into something spectacular?
It was Madeleine that left the peaches. She called in at 5 pm and I was able to give her a jar of jam. Domestic Goddess moi? She said they were peches de vigne and I was also able to talk knowledgeably about them and discuss jam with cassis which Madeleine knew well and if she hadn't spent all day (and all week) cleaning she would have made. Georges is also growing us some walnut trees in case we might need some in a new house. I didn't like to tell her that Jackie is currently minding a couple of mine for us. Incidentally I have also managed to grow two pots of Indian Bean Tree seedlings by scattering a seed pod behind the geraniums. There is a sprouting of baby trees. Green fingers too eh!
(Later -  I have done some internet searching for peche de vigne and most of the pictures seem to be of a much redder flesh than these. The peche de vigne were planted at the end of the rows of vines because they are very susceptible to mildew (roses were also planted in the same way) and if they get mildew then watch out for your vines. My peaches are pale and not really very full of flavour - maybe not ripe enough? Adding as much cassis as the recipe says makes a very over cassised flavour to my taste. I have only tasted the leftovers this morning and not the un cassised so I will open a jar of that later.)
Posted by Rosie at 12:26