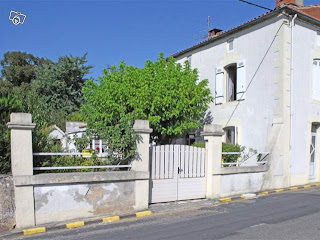 OK but no cigar.

We met Monsieur outside this house and he welcomed us in. He had got there earlier and opened some of the windows. This is the house of his parents. He moved there when he was two and to him it is his family home and therefore perfect. It is an old stone house almost next door to the ancient church. It must be very old although he didn't know how old. (All questions would have to be referred to his sister who had all the paperwork.) Everything of any age has been covered up in carpet, hardboard or peeling flowery wallpaper. But they can't hide all the signs of 2 foot thick walls, curved wooden staircases and wood floors.

It has potential. The garden is small but there is one. There is a modern, plastic garage at the back of the garden but how you would get a car in it is debatable. There is a well but it had been blocked up because as a little boy it had been dangerous - I wonder if they just blocked it off or filled it in??

What still tickles me is that when we went upstairs to see where the large rooms had been divided up with hardboard and a bathroom somehow in the way, we had to ask him to open the shutters. This revealed the lovely view down the valley that would be from the master bedroom. No, no, don't show them the wow factor..............................

He made a special point of telling us that the boiler was old (ancient) but the heating worked fine so we wouldn't need to replace that, there was a kitchen so we wouldn't have to do that would we and the bathrooms were old but hey (gallic shrug). Therefore it was priced to be lived in, not as a renovation project. Yeah right.