Much more normal feeling of things not going well :-)

Off to the estate agent who during the afternoon turned from the wonderful Monsieur to 'Him Who Speak with Forked Tongue'.

In France the buyer pays the agent's fees - and they are enormous - so there is a huge element of desparately wanting to be the one that shows you the house first because if you do buy it they will get the fee. Him Outdoors says that we haven't signed anything saying we are seeing a property with this agent but I just know that that won't matter, if we've seen the house first with him, he will get the fee.

So, of course, Monsieur Barde also wants to be the one that tells us that he is The Man for the House that we want.

First we go off to see 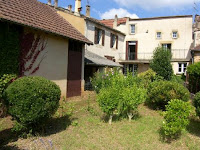 Which looks like a possible. An enormous muddle of ancient stone buildings but is in the middle of the town, has a garden, garage and view. Too much, too money pit and whatever you did you'd still end up with a house next to a pizzeria. We met another neighbour that walks with Him Outdoors who said that of course that did not matter because it was only in the summer?? Umm is not that when you sit outside? I thought that maybe it wouldn't matter quite so much if all the pizzeria chatter was in french - it would add to the ambiance. But of course it isn't in french is it, what french food tourist would eat pizza. It's all smoking english and dutch. Anyway no to that one. 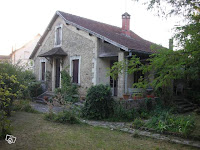 This is the house that everyone we have mentioned that we are looking for a house in Belves with a garden tells us about. We've peered over the wall at this. Good garden that stretches between two roads and lots of garage. It's very small but has room to do up the roof and the cave is lovely with two flat bottomed boats for going on the river - and the old septic tank that hasn't been got rid of but hey. But it's so dull. And overlooked. And no view.


Beginning to lose heart now. (and remember the downside of all this househunting lark.)


Off to his third one 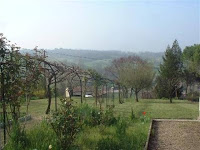 Lovely garden, lovely view, except that by being this side, it is above the only factory for miles. No garage. And guess what, the house is on the corner but the bit of house that is for sale doesn't include the bit on the corner so it is absolutely tiny. And peeking through the windows of the bit that isn't for sale, one of the rooms has a full set up drum kit! Umm is that better or worse than a pizzeria?

Ho hum, trusting soul that I am.


I am determinedly of the opinion that there is always another house. And this morning I am back on that track but last night was full of 'we're never going to make this happen', 'there just aren't enough houses'.

But this one looks possible. 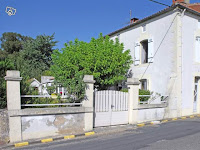 The one that we really really want is on here.

About mid way down the picture about a third of the way in from the left with a horrible conservatory thingyand all the garden you can see in front of it and two garages on the other side of the road at the bottom of the garden. Off to daydream.