Some hard graft and some fancification

We have half a cellar floor. Much effort involved over several days of preparation, then yesterday mixing concrete in the front garden and barrowing into the cellar - not through where Him Outdoors is, that's just the easiest way in without treading on it, and apparently today we have to water it (!) and cover it in plastic. Fortunately they didn't need me for the mixing. 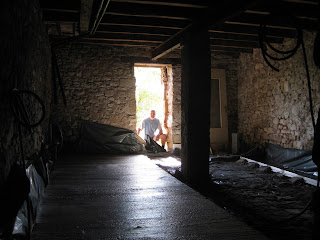 As a quieter day job, Him Outdoors has been slowly deciding how to remake the lintel of the sittingroom fireplace. Where to prop up the wall, where to remove stone. Lots of teeth sucking involved. 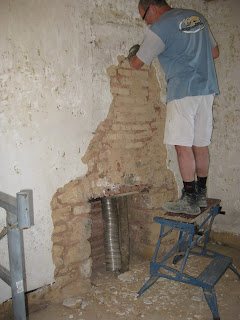 We have also been doing a bit of fancification to the fireplace in the kitchen. At some point it has been painted with really thick gloopy brown paint. Something I can't get my head round is that, when I looked closely, there is a tiny crucifix left of centre. All covered in gloopy paint. Why would you do that. Surely if you didn't want it you would remove it, not cover it in paint. Anyway one of the concreters kindly took it away to paint strip it and it will be returned to its rightful place. It was important to someone and is part of the house. 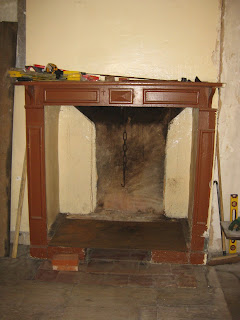 I have stripped the fireplace now and Him Outdoors has sorted out old bricks with a local brick works stamped on them and will rebuild the base so that the new woodburner will look lovely. Any ideas on what paint to use to cover sooty back - and what colours. I think the mantel will have to be painted but I'll see when I've had a go at it with sandpaper. 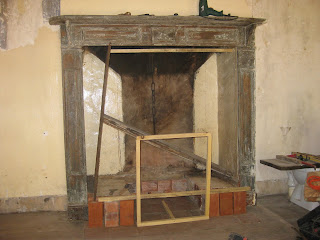 We've now got all the artisans in place. Roofer signed up but unfortunately not until November. Mason confirmed for August (!) yes a Frenchman in August. I met one of my Tuesday afternoon old ladies in the town on Saturday and after all the usual chat she leant forward and said that it was her son who had put in an estimate for the electrics. Yay result. That's him sorted then.