So here's your starter for ten. Turn this 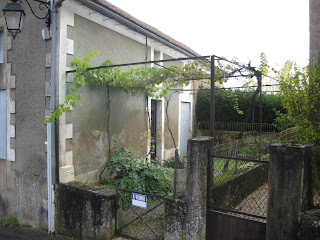 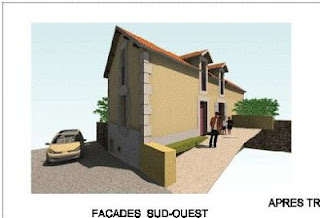 This has been one of those 'it can't be Friday again' weeks. Where did the time go?

We now have a plumber/heating engineer, an electrician, a mason, a window man, the mason is going to check the roof and an architect.

We saw the architect yesterday. We are only using him to fight the planning battles for the external holes. We are very close to the ancient bits of town so there are severe planning constraints. The architect seems to think that as long as we put more expensive cast iron velux type windows in, we should be able to enlarge the two windows in the attic and the balcony window in the sitting room and why not add these dormer ones to the front. He had several more ideas for knocking holes in that we may do later but I think for now that will be quite enough. He is very keen that we should keep the plaster on the outside and in fact make the house look exactly like his picture but I thnk so much of it will just fall off when we hit it, that all the lovely golden stone underneath will just have to show.

He is telling the planners that we are buying what used to be a second home and that because we are going to live in it permanently we need more light in the attic. This will mean that the tax people will not be told of the increased floor space and we will not have to pay more tax - I like people that come up with plans like that.

Him Outdoors is having a bit of a panic about some of the jobs that he is unfamiliar with and that people have different opinions about but 'one step at a time' will probably see us through.

And it's really exciting!