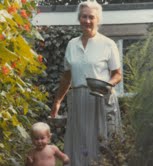 My mother has been in various EMI nursing homes with dementia for 6 years. When Dad died it quickly became obvious that they hadn't been managing for ages. About 4 years ago, she was settled in a lovely home near my eldest brother. He has been the main carer since then, taking his turn, dealing with all the paperwork and responsibility while we rushed off to make a life in France.

Mum had something called a 'cardiac episode' after Christmas. The home staff were delightful, such lovely caring people both for her and us. We all decided that there was no point in her going into hospital so she spent the last few days of her life in her familiar room being looked after by people that cared about her and just faded away. I talked with a friend before Christmas who had had the most awful time in hospital with her mother, trying to get her cared for. I am so pleased that I have none of that regret. 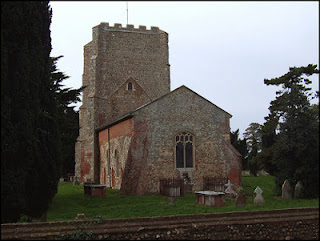 The funeral was arranged for what turned out to be a really snowy weekend. Dad is already buried in the Suffolk village churchyard where they spent a very happy last 30 years of their life and Mum was to be joining him. It was late afternoon by the time she was put in the ground, in an almost black and white photo of a winter's afternoon with gently falling snow. A lovely turnout from the village, (such broad Suffolk voices) all but one of her 5 siblings represented and a few long lost cousins that had managed to brave the snow.

As is the way of funerals, the family get together was lovely. A huge advantage for both Dad and Mum's funeral has been the ability of the internet to gather stories from all sides and ages of the family and also to gather people who have been pursuing the history of the family.

It feels very much that they are now resting in peace with everyone having done all they could to give them what they wanted.

Incidentally after my brother's euology, my daughter in law said 'he could have been talking about you'. Part of me is delighted to follow in my mother's footsteps and part of me is horrified :-)