Diary of an Ordinary Woman by Margaret Forster

This morning I finished this book. I have been absorbed in it completely, discussing different parts with Him Outdoors and finding it fascinating. 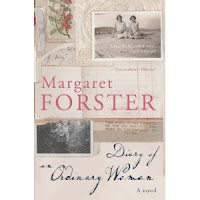 Margaret Forster has written about her mother and grandmother which I had read and on the basis of this had been contacted by the niece of a 98 year old woman born in 1901 who had written a diary throughout her life. The diarist wanted someone to read/edit/publish these diaries and this book is the story of the contact, the chosen diary entries and some italicised joining up bits.

The diarist lives mostly in London, goes through WW1, college training, teaching, social work, WW2 WVS, driving an ambulance, becoming a WAAF, dropping it all to bring up her sister's children, lovers in the 1930s, living with a married man. Ending up with Greenham Common. A fascinating life in which I have been engrossed.

At the end of the book is this paragraph:

This book began as described in the first two pages of the introduction, but I never did meet the woman in question. She cancelled our meeting at the last minute because of some family objections. I was already so looking forward to her diaries that I decided to overcome my disappointment by pretending I had indeed obtained and read them. The result is fiction. The real 'Millicent' has since died, and though her diaries exist, I have never read them.

I feel ridiculously cheated.
Posted by Rosie at 11:36